Hey, SE Readers. Joan with you on this Monday morning in April.

Before we get started, I would like to thank Victoria Ziglar for clearing up the myth of one sense becoming heightened if a person loses another (as I mentioned in my previous post). As someone with personal experience, she pointed out that her hearing wasn’t any better than it was when she lost her sight, but she is better at paying attention to it. Such is the case for most people who lose one of their senses.

This is the fifth in a series on using the five senses in writing. In case you missed the others, here are the links:

Today’s topic is the sense of touch. We are always touching something. My fingers are on the keyboard as I type this. Clothes are touching my body. My glasses are perched on my nose. (Oh, for the days when I didn’t need them to see the screen.) On occasion, my cat nudges me with his head. 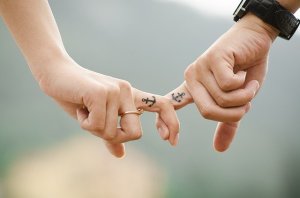 Touch is the one sense that I most often take for granted in writing. But in reality, if done correctly, touch can bring the reader closest to the character because it’s personal. Dozens or hundreds of people can hear the same sounds or see the same scenery. But the sensation of touch is usually experienced only by one person at a time.

Touch is not only tactile, it’s also sensory.

It’s important to remember touch doesn’t necessarily involve physical contact between humans or, for that matter, a human touching a physical object. Consider this passage from James Dashner’s The Maze Runner.

“Metal ground against metal; a lurching shudder shook the floor beneath him. He fell down at the sudden movement and shuffled backward on his hands and feet, drops of sweat beading on his forehead despite the cool air.”

While touch is immediate, it is also a slow sense. The use of touch is effective in scenes involving serene settings. It can also bring about a calming sensation in high action scenes such as a sporting event or a street fight.

With this post, we’ve covered the five senses. But it’s not the end of the series. There is another sense. Curious? Check back later in the month.

How do you use the sense of touch in writing? Please share in the comments.