Hi gang, Craig with you today. This is post number two in the character archetypes series. In the Hero’s Journey, there are some common characters that are likely to show up in all stories. This doesn’t mean each archetype shows up in every story, and aside from the hero, the rest are kind of optional. Almost every story will have an assortment of them.

This series is to introduce you to them. Once you’re aware of them, you can decide if they can benefit the story you’re writing.

Let’s meet one of the more fun ones.

Heroes should start off as being capable. These aren’t completely inept characters, and you want your readers to believe they can succeed against the big odds they’re about to face. But early in the story, they aren’t quite ready yet.

Think of the hero at this stage as a beautiful prime rib roast. Kind of makes your mouth water just thinking about it. Except the damned thing is raw, maybe even frozen. All that potential is there, but it needs a little something first. 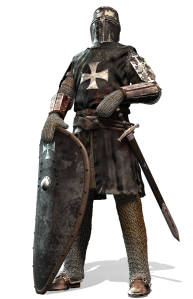 This is where the mentor character can really help. This is usually an experienced older person. In some stories, maybe a grizzled veteran. You’re all familiar with the archetype, even if you haven’t thought about it that way.

Maybe a few examples are in order:

• Mr. Miyagi from The Karate Kid.

• Yoda from the Star Wars series.

• Gandalf from The Lord of the Rings.

Okay, so I’m a speculative fiction guy and my examples tend that direction. If you think about it there are any number of real world coaches, resident physicians, college professors, political advisors, and clergymen you can come up with. They’re going to cook our hero and make him/her the star they were always meant to be.

Behind the scenes, mentors are great for getting your plot moving. Maybe you have a reluctant hero, and he needs that extra nudge to get involved. Cue the mentor…

Also, a mentor provides a great opportunity to expand upon the problem, the world building, and the challenges the hero will face. Everyone is aware that, “As you know Bob,” dialog is forbidden. However, in this case, Bob doesn’t know. When the mentor delivers a lesson, Bob is learning something important, and so is the reader.

The lessons of mentors are also great for plants that will payoff later in the story. Oh, there’s a dark side of the Force. Wonder what that’s all about?

One other thing mentors traditionally do is provide gifts to get the job done. This involves not only the lessons or training, but physical items the hero will need. You have a lot of leeway here, and sometimes the mentor is a conduit to those gifts.

Zeus takes a personal interest in Perseus. He gets the Gods to provide his son with magical items to help him on the hero’s journey. Merlin leads Arthur to a point where the Lady of the Lake can present him with Excalibur.

This brings me to another good point. You don’t have to do the copy and paste kind of thing some of you are already thinking. Characters are as malleable as you want to make them. You can mash them up, have them serve more than one archetype role in your story, or change the status quo somehow.

While they can simply hand over a lightsaber, they might send the hero on a mini quest to earn the item. I remember when Zorro had to steal the horse himself. His mentor put him up to it.

Mentors don’t have to be nice people. Some of them can be brutal, both physically and mentally. Think back to Pai Mei once more. He made Uma Thurman eat off the floor like a dog and beat the crap out of her.

Mentors are usually colorful characters. If, like me, you tend to write more stoic heroes, then a mentor can be used to drop a bit of color and charm into your story. They give credibility to your story, because some milkmaid did not suddenly pick up a rapier for the first time and use it like a fencing master. She trained with it and we saw her failures along with her successes.

An important thing the mentor also does is exit at the wrong time. Or is it? It’s kind of SOP to have the bad guys kill the mentor just before the training is complete. This adds emotion and tension to the story. Can’t argue with that, but it’s also a trope to be avoided. It’s what I refer to as low hanging fruit.

I don’t kill mentors, or pet characters. I’m not saying I never will, but I like to think outside the box. At some point the mentor can become a crutch for the hero. The crutch needs to be removed so the hero can go on to complete the story.

This event is a must, or your hero might just train forever, or rely upon the mentor to take care of everything. What can you create to put a fresh spin on this situation? Kidnapping of either one? Injury? Separation by natural disaster? Something a bit higher up the tree is in order here, look where the better fruit grows.

I think it’s important to let the hero go off half baked. Remember, even a prime rib needs to stand a few minutes before you slice it. There is a nice tension when readers wonder if the hero improved enough to get the job done. Luke went to face Darth Vader before his training was complete. Even after he returned to Yoda, about all Yoda did was die. Was his training complete?

Some of you are reluctant to take a formulaic approach to stories. I’m perfectly fine with your approach, because there is no one way to do things. Maybe this series is information that will spark some kind of event in a future tale of yours.

This information is only as formulaic as you want to make it. You can put unique spins on everything. In The Guardian, the mentor was the main character. He trained his star pupil in the form of Ashton Kutcher. When Kevin Costner died, the story ended, but we knew a new generation of Coast Guard heroes was in place. It’s a unique tale, but from a writer’s viewpoint it’s pretty creative.

Have you ever written a mentor? Would you consider it after reading this? I’d love to hear from you in the comments today.

Post number one was about The Hero. You can read that one here. The next one is The Ally.

43 thoughts on “Character Archetypes: The Mentor”