Me-me-me-me. Uh-hmmm. Since I’m warmed up, here’s my best singing demonstration. April fool’s joke, Story Empire readers, I’m not going to show off my singing pitch today (I hear those cheers to escape that fiasco and they are well-taken). Nor am I going to demonstrate my best baseball pitch. No, today, I’m discussing honing a pitch for your work, yes, the old elevator pitch where you try to make the sale to an editor in a minimum number of words.

Many of our readers are self-published, some are hybrid authors and some are working at being traditionally published. Regardless of the type of author you are, you should know about pitching your story to an editor, agent or other industry representative. You just never know when you will have the opportunity arise and it’s good to keep something in your back pocket rather than miss out.

I recently had such opportunities on a cruise hosted by the literary agency representing me. It was a fun trip but also a working vacation. Because of my work schedule and my thyroid problems, I arrived unprepared in large part to pitch anything which was nerve-wracking to say the least since I’d never done it previously. Yikes! That’s a cold sweat moment but let me share some tips I learned during the trip and I’ll share a bit more of the outcome to set your mind at ease.

The agency scheduled an editor from a larger publishing house to sit with conference members and let them share pitches. That took some guts in front of a bunch of strangers, especially when the editor gsve feedback. For my part, I wanted to learn by listening and watching so I’d know what an editor is listening for during a pitch. Many of the pitches seemed good to me but I soon learned the editor was looking for more in most cases and I soon picked up on those cues. Here’s a few things I learned:

Sitting through those early sessions were invaluable but I can tell you there were people who just didn’t get it at all. They wanted to tell the entire plot summary and that’s just too much information – period. Also, there’s more to it than my few bullet points so find some other sources (sorry I haven’t gotten some in this post).

Even more valuable was the chance to meet my agent and my fellow authors represented by her for breakfast several mornings. We traded pitches, getting feedback. At first, I fumbled through these mostly because I’m not a morning person these days, but it was still good to learn. Later, my agent sat at dinner with me and got me to pitch again. I’d been working on my pitches in the room and rattled off two for her and she said she wanted me to get with a specific editor because three pitches would take longer. With my agent’s guidance, I got a meeting later that evening and scored two requests for my latest novels. My agent was ecstatic.

Next came the pitch-fest on the last day of the conference. We lined up to pitch to editors and I had my other choices in mind, including a scout for movie/TV tie-ins (you get the drift on what companies that could be but I’m under a cone of silence which one for now). I jumped in that line and pitched everything I had prepared for my three main intellectual properties and the scout asked for them all. Big grin at that outcome since it was one of the main reasons I went in the first place. I moved on to the other publisher that handled fantasy and pitched my newest novels. This was where I fumbled on a question but just as the timer went off, I slammed in that final pitch for the other book and scored the request. There’s something to be said for not giving up and talking fast! 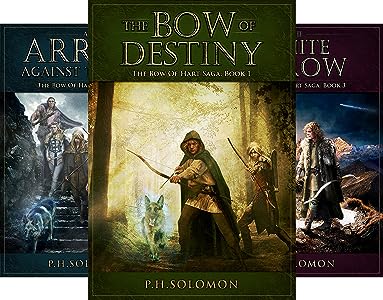 So here’s a sample of one pitch for my existing series, The Bow of Hart Saga, since I really can’t share the newest ones at the moment. This one is a little longer than the others since it was for a media tie-in, needed some fantasy background and included the entire series:

Lord of the Rings meets Harvey
Athson suffers from hallucinations from the childhood tragedy when his village was sacked by trolls, even seeing a dog which no one else can. After he comes into possession of a will leaving him the mythic Bow of Hart prophesied to defeat the dragon Magdronu, he’s uncertain it’s even real because it dreamed it first. When dangerous trolls serving the dragon pursue him the danger is all too real and Athson is reluctantly drawn into a quest for the bow. The journey challenges him with love and danger as well as his understanding of his past and reality. After he finds the bow, he finds his enemy touches his life far closer than he ever expected with a personal betrayal. Choices between self-sacrifice and revenge challenge what he knows of the bow and the implications of the associated prophecy. Can Athson overcome his past and correctly understand how the bow must be used to defeat his enemy?

I literally read this to the scout (the others also when I pitched those too). She actually laughed when I mentioned Harvey which is a play from decades ago about a man who’s the only person that sees a big rabbit and was adapted into a movie starring Jimmy Stewart in 1950. The scout was younger than me but knew the play and it got her attention. The rest was answering her questions before moving on to the other pitches that she also wanted. And yes, they will consider unpublished works too so that is a big motivator for publishers if get interest from that angle. In the end, there were requests for a submission from everyone to whom I pitched which made my agent very happy (incidentally, she had a boat-load of requests based on pitches from her authors so she’s busy right now). The outcome for me exceeded expectations, especially since I had a crash-course in pitching. That one pitch above here is a little long but stays on the plot of the main character. It’s almost a blurb but none of the others went that long and I had some good comparisons for those too.

Pitching your work is likely necessary at some point so read up about it from other sources and practice it by going to conferences where you can often pitch to both editors and agents. There will be some stage-fright but push through that feeling and give it a go, you never know what will happen. I got to know a few people in the process, learned a lot and landed a few opportunities. Getting your foot through the door is important and the pitch is the tool for gaining the access. It’s your writing, so if you don’t try it, no one else will.

Have you created a pitch and used it? What was the outcome of your previous pitches? Thanks for reading today. Please leave your thoughts in the comments section and I’ll respond as soon as I can.

34 thoughts on “How to Hone Your Elevator Pitch”