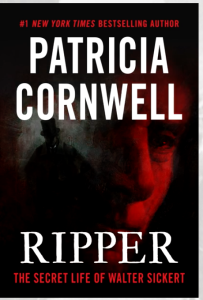 There’s a new craze on Kindle (at least, it’s new to me) called Kindle in Motion. The books can be read on any device that reads Kindle books, but the covers and insides have motion (hence the name, of course. 😉 ) that can be viewed on certain Fire tablets and on the free Kindle iOS and Android apps.

All of these covers caught my attention, because, you know, they move. I’m going to show one of them that really drew me in—Patricia Conrwell’s Ripper: The Secret Life of Walter Sickert. (Please click on the book cover to view the motion effect on Amazon.)

This book happens to be a nonfiction selection, but this cover could just as easily be on a mystery/suspense/thriller novel.

The graphic is incredibly dark, setting expectations for the dark tone and subject matter of the work. There’s a silhouette of the ripper, which is much more ominous than a clear representation would be (unless there was something frightening about the killer’s features). There’s also a face, partially in profile, done in a deep red. The color evokes a sense of blood and violence.

The author’s name and the book title are white, so they really pop. Also, they’re in all caps, so they have more power than title case would. The name is sans serif, typical of contemporary books (fiction and nonfiction). The title is serif, which calls to mind a historical period—Victorian London. The subtitle and the author’s bestseller statement are the same red as the graphic, so they coordinate nicely. Because of the smaller size, they are written in sans serif fonts, which makes them cleaner—and therefore easier to read—than a serif font in all caps would be at that reduced size. (Sentence or title case is another matter, though, with respect to readability.)

The motion knocks the graphic back to black then fades in first the top-hat man and then the red face. There’s no music, but you can almost hear the suspenseful notes as the graphics take shape and then fade out again. The entire cover provides a dark, sinister overtone, perfect for the topic at hand.

In my opinion, this is a great cover for the topic and would be equally effective in the mystery/suspense/thriller genre.

Have you seen these Kindle in Motion books? What do you think—gimmick or new standard in great cover design? Let’s talk about it.