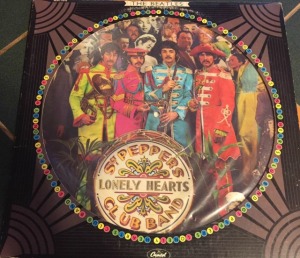 My copy of a Sgt. Peppers vinyl picture disc.

Hi, SE Readers. Joan here. I’ve been a Beatles fan since I was six years old. Ever since I heard that first song on the radio back in 1964 (yes, I’m dating myself), I was fascinated by those four young men from Liverpool, England.

I can’t remember which of their songs I heard first—it may have been “She Loves You” or “From Me to You,” but most likely it was “I Want to Hold Your Hand.” It doesn’t matter. From that point on, all other music that I listened to seemed almost obsolete. (Having a teenage brother with a rather extensive record collection helped develop my love of music.)

The hit songs kept coming, the group kept touring, and finally, in August 1966, they performed their last on-stage concert at San Francisco’s Candlestick Park. The reason they quit? Stage sound equipment was primitive in the sixties, and it was nearly impossible for them to hear themselves over tens of thousands of screaming fans.

But more importantly, they wanted to grow as a group and individually as songwriters. They knew they could never replicate on stage what they could do in the studio. So, enter the era of Sgt. Pepper’s Lonely Hearts Club Band.

This single album helped change the course of music history. It was, in many ways, before its time. I didn’t realize how much until I watched a documentary in celebration of the fiftieth anniversary of the album’s release.

While Lennon and McCartney were tagged as a songwriting duo, in reality, each wrote their own songs. In late 1966, Lennon penned the words to “Strawberry Fields Forever,” a song much different from any previous work. Not to be outdone, McCartney wrote “Penny Lane.” Originally slated to be part of the Sgt. Pepper album, the two songs were released as a double-sided single in early 1967. But the innovative work continued on other songs such as “A Day in the Life,” “Being for the Benefit of Mr. Kite,” and “Within You, Without You.”

So how to the Beatles and Sgt. Pepper relate to writing?

A word of warning. Never allow a healthy competition to break a friendship like John and Paul during the Beatles’ break-up. Envy for other authors is something we should never do! (For the record, when Lennon was murdered in 1980, it’s been said one of the first people Yoko Ono called was Paul McCartney because she knew that’s what John would have wanted. In the long run, their friendship withstood the test of time.)

47 thoughts on “The Beatles, Sgt. Pepper, and Writing”