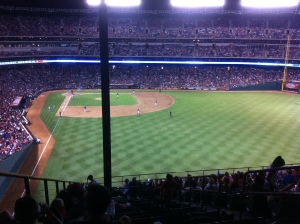 In the 1989 film Field of Dreams, Kevin Costner’s character, Ray Kinsella, begins to hear voices. “If you build it, he will come.” Those of us familiar with the movie know Ray plows up part of his cornfield to build a baseball diamond in hopes of communicating with his deceased father.

Several long-deceased players who were banned from baseball due to the 1919 “Black Sox Scandal” show up and begin to play ball. Ray’s father eventually comes, along with tens of thousands of people to see this “field of dreams.”

I’m not here to talk baseball today (although I am a big fan of the game) but about writing and promotion.

You have a dream. You want to become a published author. You’ve built the perfect website—even hired a professional designer to give it a unique look. And now, you’ve published your first book, and you’re an overnight success.

Okay, that is a dream. Not many writers are overnight successes. No matter what you build, you have to reach out to others. How?

You don’t have to be part of every site. Pick two or three to start and begin building up your followers.

While social media is essential, a good website is a must. It’s your platform, a place to market yourself and your books, and the best place to connect with your readers. Make sure you have a blog as part of your website.

In my opinion, blogging for fiction writers is often more challenging than for non-fiction writers. Unless it’s a “how to” site like Story Empire, finding topics related to your books is often hard. I admit to struggling in that area. A few things I have done are character interviews, stories behind the story, and posts about settings.

For a while, I wrote a First Friday Fiction post but had to give that up because I found I was dedicating more time to writing flash fiction stories than longer works.

You don’t have to be religious to believe in The Golden Rule. The more you do for others, the more others will do for you. I’m not talking about doing just for the sake of getting something in return. Genuinely reach out to others and offer support when and where you can.

I recently opened my personal blog to guest authors. Not only does this give me content, but it also paves the way for my readers to learn about writers they may not be familiar with. And for me, it feels good when I can help encourage and support writers.

Several years ago, a friend and I began a local writer’s group. We didn’t have a clue what we were doing but invited guest speakers from time to time. My friend asked a published author who lived in a nearby town if she would be interested in speaking to our group. Her response? “What do you want from me? I don’t speak to groups, and I don’t help other writers.”

You can imagine how much that turned me off and even though I had read some of her books, I’ve never purchased another one. I vowed then and there that if I ever became a published author, I would do what I could to help others.

One of the most important things an author can do is build up their email list. Offer something free in return for those who subscribe to your newsletter. (Something I lack since I took my novella The Stranger and put it on Amazon a perma-free book.)  Yes, the “to-do” list grows.

Join up with a free give away promo site such as Instafreebie. I recently did a giveaway and doubled my subscriber list. Yes, you’ll always have those who later unsubscribe, but that’s okay. Don’t take it personally. You want followers who care about your work—not just those looking for something free.

But even with all the things I’ve listed, you must have valuable content. Write the best book you can write. Publish it and write again. The more of a backlist you have, the better.

As you can see, building something won’t guarantee visitors will come. You have to reach out. By taking small steps, others will begin to visit. If they like what they see, they’ll return.

By the way, in Field of Dreams people didn’t automatically come to see the place where a crazy farmer plowed up a field. They heard it by word of mouth. And when they heard, they came.